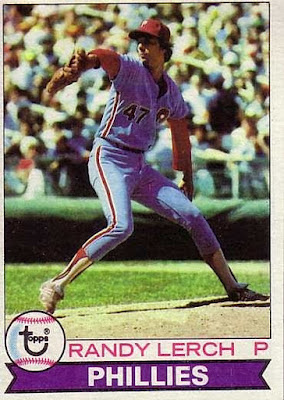 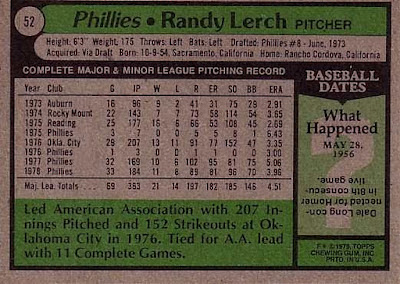 ﻿Card Front: We see Randy the lefty in his windup on the road. I would venture to guess this was taken at Shea Stadium in New York. It is really hard to tell too much about this card because it was taken from a distance. We can see his stirrups and his #47. I wonder if he is giving them the heater?

Card Back: It seems Randy made the eventual climb to the Phils with September call ups in 1975 and '76. His 11 wins in the 1978 season would be his highest total of his career for any one year. Granted it was minor leagues, but 11 complete games is way more than any major leaguer gets nowadays. The baseball date of Dale Long homering in 8 consecutive would be matched by Don Mattingly in 1987, and Ken Griffey in 1993.

Six degrees or less to Seattle: While Randy was always an NL guy he can tie to the Mariners. As part of the 1983 San Francisco Giants one of Randy's catchers was Steve Nicosia. Steve would move on to be part of the 1985 Montreal Expos playing along with a very young Andres Galarraga. At the end of his career, the Big Cat was a member of the 2001 Texas Rangers. A new $252M man had come to Texas that year from Seattle named Alex Rodriguez.

Blog related to the team: Ahh, the Phillies. They have so many fans, and so many of them have blogs and collect cards. One fan that just recently featured me on his blog is Paul of the great blog Phungo. Not only does he love his Phils, but he also does some awesome custom cards. I hope to someday get my hands on some custom M's cards.

Next Card: Mick Kelleher, Cubs
Posted by Mariner1 at 9:03 AM

Lerch was given the shaft by the Phillies for the 1980 post-season. To get September call-up Marty Bystrom (who went 5-0 for the month) onto the post-season roster, an "injury" to Lerch was cooked up.