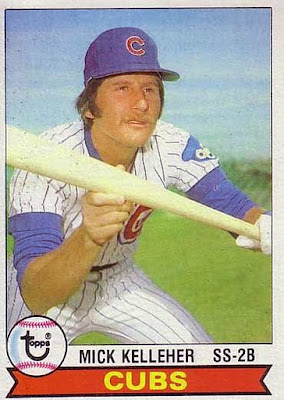 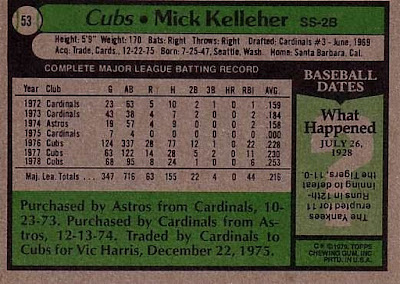 Card Front: Mick has great form when it comes to laying down the bunt. I'm not too sure on the high hat and that awesome moustache, but I'm loving the uniform. What did the Cubs do with the tight unis with the blue cuffs on the jersey and what happen to the bear on the sleeve??

Card Back: As you can see, Mick is usually one of the bench guys that can play the infield. The Cubs gave him a shot for the year in 1976 but obviously didn't think he was the best. Mick would leave the Windy City after 1980 spending 1981 in Detroit, and splitting the next year with Detroit and California before hanging it up.

Six degrees or less to Seattle: As you see Mick was a Seattle kid, even attending Shoreline HS. But for the Mariners sake, Mick was part of the 1981 Tigers along side a rookie named Kirk Gibson. Gibby would be part of the 1993 Tigers with David Wells. Boomer was a member of the 2007 San Diego Padres with Hiram Bocachica. Hiram was a part of the 2004 version of the Mariners.

Blog related to the team: ﻿As we all know if you like baseball, there are many fans that love the Cubbies. There are just about as many that blog about them too. One man that has done it for a long time and keeps himself very busy keeping us informed is JayBee. Not only does he keep us up to date with the Blogroll, he also runs bdj610's Topps Baseball Card Blog. He is one of the handful of blogs that inspired me to start mine.

The transaction history cracks me up. I guess the Cardinals decided they made a huge mistake parting with a .158 hitter.