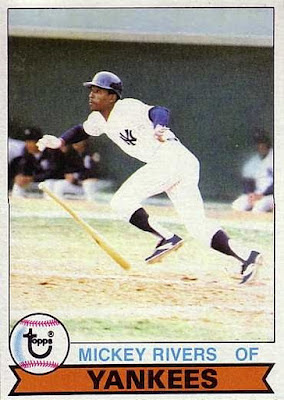 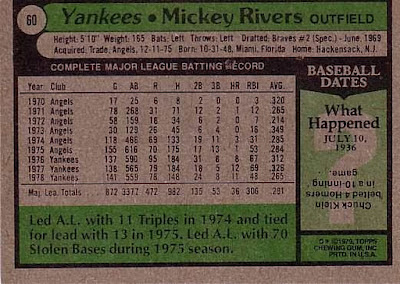 Card Front:﻿ I have always loved this card. The look of Mickey hustling out of the box after maybe a bouncer to third. The flapless helmet, and the stirrups look great with the pinstripes. All of his teammates in the dugout look so disinterested. I never really did understand an orange stripe for the Yankees banner though.

Card Back: Mickey couldn't get regular playing time with the California Angels until two years before he was traded to New York for Bobby Bonds. Once in the Yankees outfield he was able to shine. The guy had such speed to be able to have 53 triples and 135 doubles in his career to this point. Mickey spent time in four organizations before making the big leagues.

Six degrees or less to Seattle: In Mickey's first full year with the Angels in 1974, Mickey spent time with Frank Tanana. Frank would move on to be part of the 1993 New York Mets, playing with "Doc" Gooden. Dwight would spent a brief time(8 games) as a Tampa Bay Devil Ray in 2000 having Randy Winn as a fellow Devil Ray. Randy would come to Seattle in the deal for Lou Piniella, and be a Mariner from 2003-2005.

Blog related to the team: There are so many Yankees fans. I don't think we all can keep enough Yankees cards in our collections to satisfy Yankee fans in trades. One team of bloggers that has been going for quite a while is the ladies at A Cardboard Problem. Sooz and Marie have gone underground for a while blogging but I know they are still around, go see for yourself.

nice idea.. thanks for sharing.