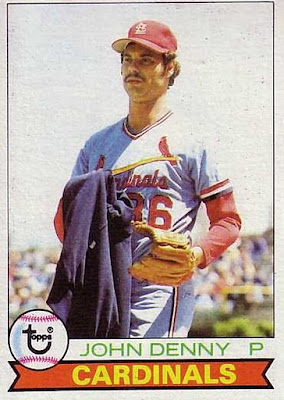 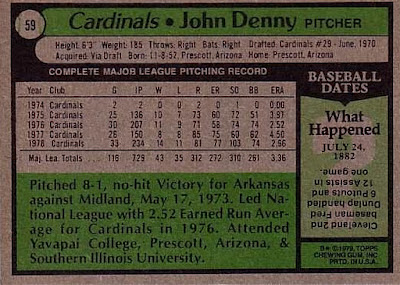 Card Front: I can't tell where this is, Chicago maybe or is it a Spring game? John doesn't look happy and really wants the batboy to take his shirt so he can get on the mound. I do remember those blue pullover shirts the Cards had with the classic Redbirds on the bat. Some things stay the same through time just as they should.

Card Back: I guess Topps found that all the information they gave us on the bottom of John's card about the no hitter, the ERA title and going to junior college was super necessary. They took away all of his minor league stats and left us with big leagu numbers. It is always good to see the college name and I always thought SIU had a cool mascot name in the Salukies.

Six degrees or less to Seattle: After John left the Cards, he was part of the 1981 Cleveland Indians. John would play that season with Von Hayes. Von would make it big in Philadelphia as a Phillie. One of Von's 1990 Phillie teammates was Chuck McElroy. Chuck came out west to be part of the Anaheim Angels in 1997. That year was the first  for Shigetoshi Hasagawa, who came over from the Orix BlueWave﻿ in Japan. Shiggy would be part of the M's bullpen from 2002-2005.

Blog related to the team: I did get a few requests to be put on the Cardinals list when I begged for more blogs. One blogger that stepped up and asked has gotten pretty popular in the blog world. I read him, and you should too. I'm sure you all know Matt. He runs the blog that is known to carry the Tenets of Wilson. I wish I could remember who Wilson is, I'm sure he's a cool dude.