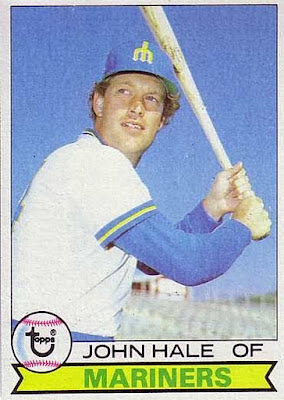 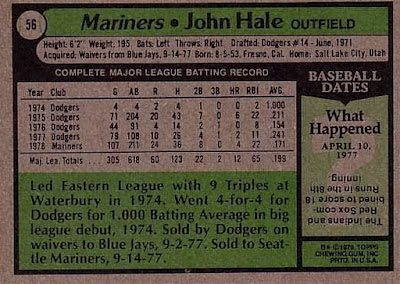 Card Front: Here is John making it look like he is in the batter's box. Too bad he doesn't have a helmet on in the on deck circle at Diablo Stadium in Tempe. I'm amazed that the Angels still play there every spring to this day. It must be a cool day in Arizona with the long sleeves. I really miss the old Trident M on the hats.

Card Back: It took John a few years to get from the draft to the Dodgers. I know it was hard to find playing time in their outfield in those days. While you could say John found a home in Seattle playing everyday, he would leave after the 1979 season and would spend the next 2 seasons in AAA before retiring. By doing my research, the Indians and Red Sox scored 19 runs in that 8th inning.

Six degrees or less to Seattle: Of course John was a Mariner. Why can't we dig a little deeper do tie him to another Mariner player? When John came up in 1974 he was a Dodger with Charlie Hough. Charlie would be part of the 1991 Chicago White Sox, playing with Roberto Hernandez. Roberto would move on to be a member of the 2006 Pittsburgh Pirates along with Jack Wilson. Jack come to Seattle in 2009 and be shipped out in the 2011 season.

Blog related to the team: There is a man who spent many a day in Seattle. He might be far away and in Massachusetts but he still loves my team. He also has a great feeling for the #5. That is the basis for some of his collection. That great blogger is Matthew of the Number 5 Type Collection. He has a vast array of old cards from all over and is always willing to share. Tell him I sent you to see him.