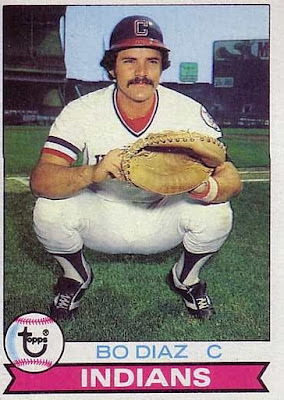 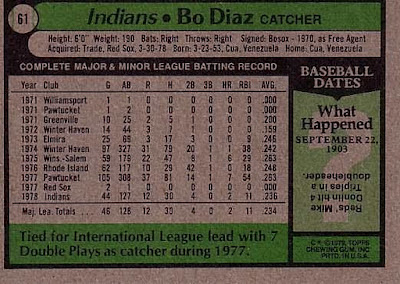 ﻿
﻿Card Front: Dude, that's one tough catcher! No padding, no mask, just crouch and catch it. I know it is offensive to some, but I've always liked the Chief Wahoo logo better than the block C. I like how back in the day Topps didn't care if us kids saw the Marlboro man, now it is so taboo for kids to see that.

Card Back: Bo would platoon with Ron Hassey as the Indians catcher, but also spend alot of time at AAA Tacoma. His hot start in 1981 would also earn him an All Star selection that year. Bo would play through the 1989 season, but tragically he was killed at his home in Venezuela at age 37 when he was adjusting his satellite dish and it fell on his head and neck.

Six degrees or less to Seattle: After Bo left Cleveland, he was a part of the 1982 Philadelphia Phillies playing with a young Julio Franco( who hasn't played on a team with Julio?). Mr. Franco would make an appearance on the 1999 version of the Tampa Bay Devil Rays. Another player in Tampa in 1999 was Quinton McCracken, who would spend a whopping 19 games with the 2004 Mariners.

Blog related to the team: I still am having a hard time finding Indians card collectors. I have featured the two I know of. I decided to go with the first Indians blog to pop up on Google. Let's Go Tribe was the first pop up. It looks to has good info for the friends of the feather as Harry Doyle would call them.