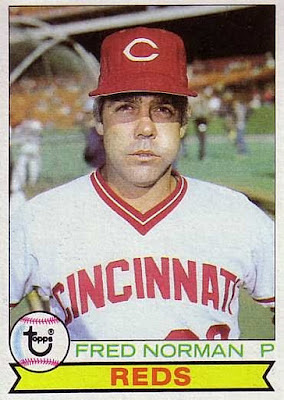 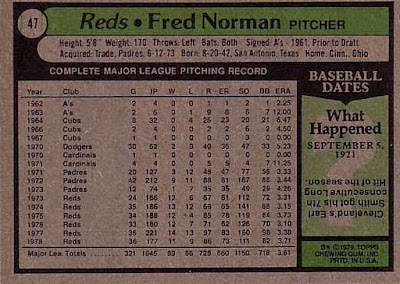 Card Front: Fred has done his time with photographers in his career. ﻿He looks none too happy to be standing in the sun on the road before a game to please the picture guy. I really have a hard time deciding what's worse: the big chew in the left cheek, the stare of death, or those monster eyebrows Fred has working.

Card Back: Now that's what I call a healthy career! From Kansas City, to Chicago, LA, St. Louis, San Diego and Cincinnati in the span of 16 years with a few years in the minors. It's hard to tell if it's bad teams, or Fred just wasn't all that great. His highest wins in any year is 14. Fred did win two rings with the Reds as part of the Machine though.

Six degrees or less to Seattle: Since Fred would see the country by playing in many places, he had many connections to the Emerald City. During Fred's time as a member of the 1970 Cardinals, one of his battery mates was Ted Simmons. Ted would move on to be part of the 1986 Atlanta Braves along with Jim Acker. Jim would finish his career in 1992 with Seattle. Ted now works in the front office with the Mariners also.

Blog related to the team: I know that the Reds are down from their heydays, but I'm surprised they are hard to find in the blog world. One die hard that is blogging about his team has a good one. The title is simple: Cincinnati Reds Baseball Card Collector. He is working on some old cards and new cards, so go give 'em a look.

Next Card: Merv Rettenmund, Angels
Posted by Mariner1 at 7:20 AM

Just discovered this blog today - the 79 Topps set bring back a lot of memories for me, one of the first I completed. Re: the trivia on the back, I wonder how a "Long Hit" is defined?

Thanks for the shout out! And you can never go wrong with a Red's player!