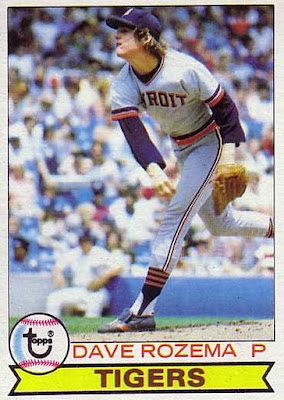 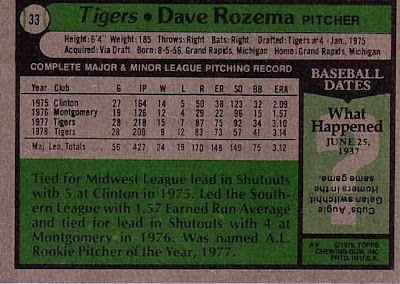 Card Front: Here is Dave after the release of a pitch. It appears to be an early spring game at Yankee Stadium in New York. Maybe Dave just preferred long sleeves, I'm not too sure. You have to love the old pants with no belt, and the striped stirrups. Where have you gone stirrups in favor pajama pants?

Card Back: Dave didn't spend too much time in the minors before debuting with the Tigers in 1977. He had a good year in his rookie season, and his numbers were similar in '78 but obviously the Tigers couldn't win for him. I think it would cool for him to be from Grand Rapids and play for his hometown Tigers.

Six degrees or less to Seattle: Dave would bounce around during his career. In 1985, Dave was a member of the Texas Rangers. One of his mound mates was Frank Tanana. All the way back in 1974, Frank and Bruce Bochte would play for the California Angels. Bruce would come to Mariners and be an All Star in 1979.

Blog related to the team: There are many Tigers fans that blog out there. One of my favorites and Trade partners lives right in Michigan. He is also one of the biggest Michigan Wolverines(GO BLUE!) fans I know. Everyone needs to go over and read up on Dennis at Too Many Verlanders. He always has good posts, and will hook you up trade wise.

84 Series champs FTW! One thing I always remembered about Rozema is that he and Kirk Gibson married a pair of sisters in a double wedding back in '85.

Also, thanks much for the shoutout and GO BLUE!

This is the reason I was looking forward to this blog. There are cards in this set that I've never seen before, even though I collected the 1979 set feverishly as a youngster.

First time I've ever seen the Rozema card, and my only thought is: Must. Have. It.